Why Cadence Matters For Triathletes

Over the 4 years I have been coaching, it has surprised me how many triathletes find their preferred cadence in the 70’s and 80’s. Some people are able to adapt quickly to the suggestion of cadence in the 90’s, others have tried and made progress much slower, while others seemed to ignore the advice. Cadence seems like such an insignificant thing to focus on when there are so many other “more important” things to look at with cycling data, such as watts, heart rate, variable index, intensity factor, etc. Just like not all calories (energy) in our food are created equally, the watts (energy) we create while riding the bike are not created equally. For example, you can push 1000 watts in a 53:11 gearing as low cadence and high force pedals. Or, you can create 1000 watts at your 39:28 gearing spinning extremely fast with low force on the pedals

This is where a tool known as Quadrant Analysis comes in extremely handy. Unless I am mistaken, TrainingPeaks used to have this on their on-line software up until a couple years ago when the whole software got a face lift. I haven’t been able to find it on there anymore, so if someone reading this knows where it is buried in the program, please let me know.

When cycling there are basically 2 variables that control the wattage that shows up on your cycling computer. Those variables are force (in Newtons) and velocity/ (cadence). Depending on how much force, relative to your functional threshold power (FTP), and how fast you are spinning those pedals in around in a circle will determine which quadrant that second of power will fall in.

Quadrant #1 – High cadence and high force: Think of this on the extreme end of sprinting your brains out. Your force will be maximal effort and your cadence will be high because you are likely running out of gears to shift into. However, this could include suprathreshold efforts to bridge a gap, pass another triathlete within the time alloted by either USAT or IronMan.

Quadrant #2 – Low cadence and high force: A watt usually falls into this quadrant when climbing a really steep hill and you don’t have an easier gear to get into. Most commonly probably found in MTB races and cyclocross, but some triathletes that pedal at a chronically low cadence no matter their effort will fall into the quadrant as well.

Quadrant #3 – Low cadence and low force – watts created in this quadrant typically occur during recovery rides or social rides. These can also occur when soft pedaling down a hill or in a group when the group isn’t attacking

Quadrant #4- low force and high cadence – watts created in this quadrant typically occur during accelerations when done correctly. Just like when a car accelerates, the RPMs go high and then gears shift. Cycling accelerations should be the same, bringing the cadences up over 100 or 110 RPM before shifting gears.

So what does all this fancy stuff mean for the triathlete? Remember how I said earlier that not all watts are created equally and used the example of how to produce 1000 watts? Well, the reason is because of the type of muscle fibers recruited to create any amount of power. People are born with slow twitch (type 1) and fast twitch (type 2) muscles. Fast twitch muscles are recruited more the second quadrant (high force, low cadence) and more slow twitch muscles are recruited in the fourth quadrant (low force, high cadence). This is extremely important to the triathlete out there trying to race well. The more fast twitch muscles that are recruited to create the same wattage, the more glycogen that is burned in comparison of fat to fuel the muscles. This saves you valuable energy for the run (along with maintaining a smooth power output, or variable index, over the duration of the bike course). Reducing the amount of glycogen burned on the bike allows you to use more on the run. The average person can only store about 2000 calories of glycogen in their muscles. In comparison, even the leanest athletes can store over 10,000 calories in fat.

Now, I’m not saying that you should 100% of the time use low force and high cadence for your triathlon training. What I am saying is to be mindful of how much time you spend mashing gears, or pushing harder than you need to complete a pass. These small efforts in a triathlon race can really wreak havoc later in the race, especially if it is a longer race such as a 70.3 or 140.6.

Below are quadrant analsys from both an athlete that paced well in their Ironman race and another that didn’t from the book “Training and Racing with a Power Meter” by Hunter Allen Andrew Coogan. 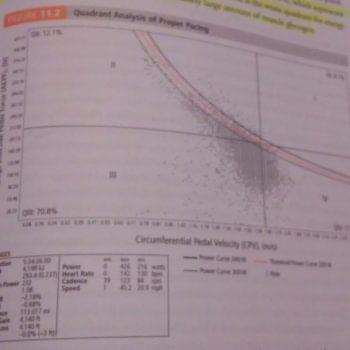 Notice how the majority of the dots are in quadrants 3 and 4. this means the athlete is burning more fat than glycogen and set themselves up for a good run off the bike 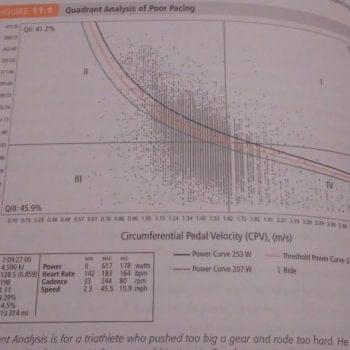 Notice how the dots are scattered all over the place with a fair amount of them in quadrant 2 – low cadence and high force. This athlete burned a lot of glycogen and probably didn’t run well off the bike