The last weekend on June, Isaac raced in the elite AG division at the Dam Tri in Pennsylvania  Since there isn’t ever really any useful data in the swim portion of the triathlon other than comparing his time to other competitors (due to variation in course length sometimes being short or long, gps errors, etc.), we will move right on to the bike data. 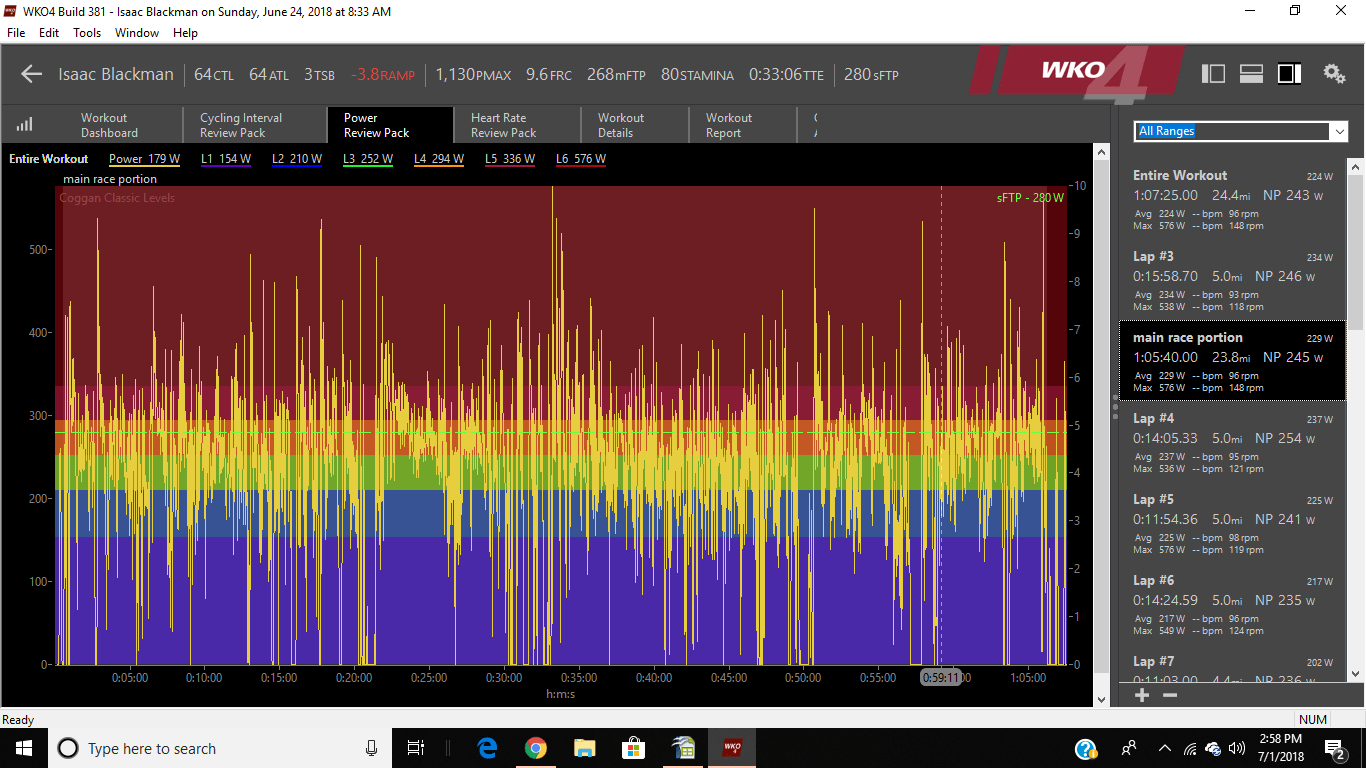 We will start with some of the basic stuff that I typically look at.  If you need a refresher on some of the terms I’ll be using, refer to a previous blog I did on some power files for 70.3 Chattanooga.  Since the bike file included Isaac getting on an off the bike, I highlighted the portion where he really “started riding.”  The average power was about 230w and the normalized was about 245.  Considering this course wasn’t a fast course with the hills and such, the TSS for the bike was 85.  That is just a little shy of the goal of low end target of 93 TSS for an olympic bike course.  So he obviously could have pushed just a few more watts.  I think even 5-10 watts more would have placed his TSS high enough to fall inside the suggest range
His VI was 1.07 for the highlighted portion.  Anything 1.05 or less indicates a smooth power output.  With all the hills in the course, that made it harder to achieve the 1.05 or lower target.  Not too far off here either. 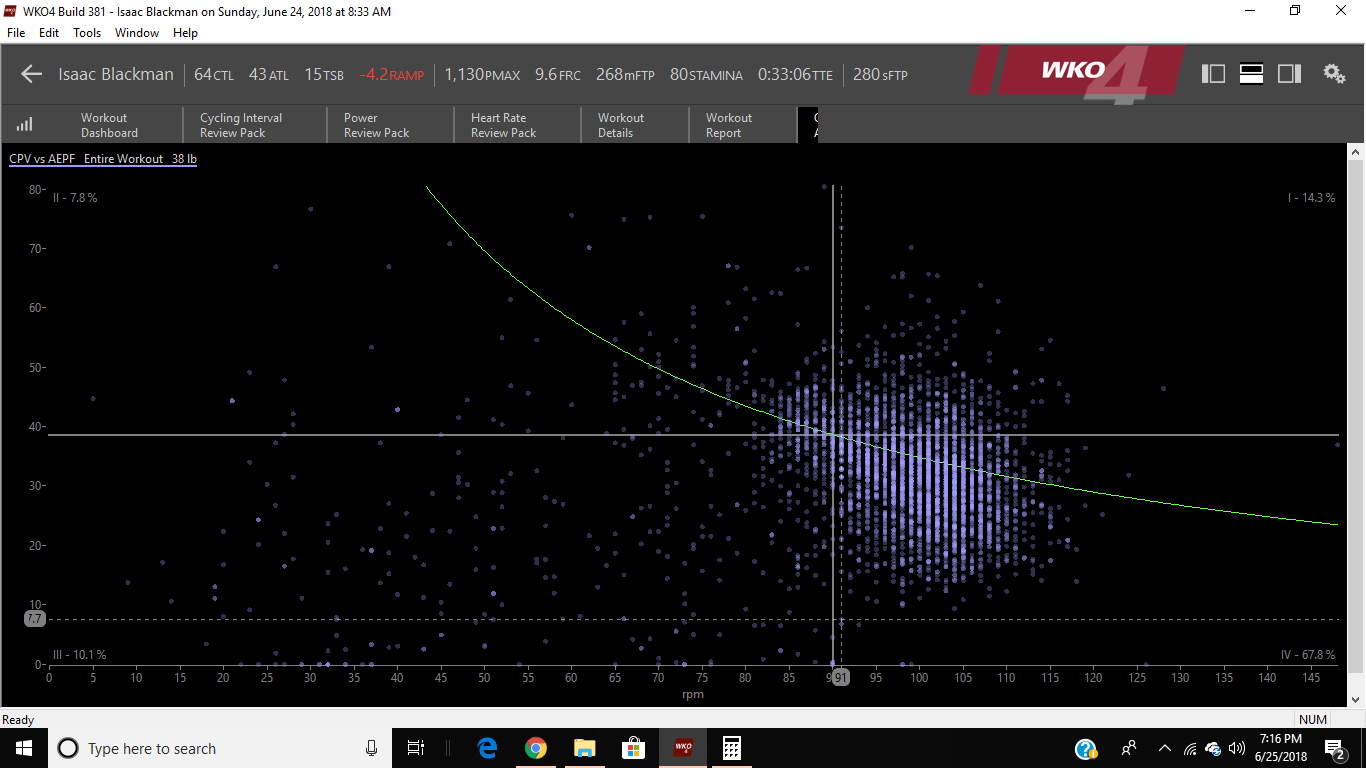 The graph above is called a Quadrant analysis.  What I want to see when looking at this is the majority of the bike should be in quadrant 4 (high cadence and low force) because that is where a triathlete uses the most fat for energy to produce the wattages.  It also means they are pedaling faster which most mimics a normal run cadence making it easier to run off the bike.  The next quadrant I want to see the most time spent in is Q3 (low force/low cadence).  Time should be limited in quadrants 2 (high force, low cadence) and 1 (high force, high cadence) since that is where glycogen is used more to can really zap energy later in the race (especially the run).  Isaac did remarkably well on this!  Click here to read more about Quadrant Analysis. 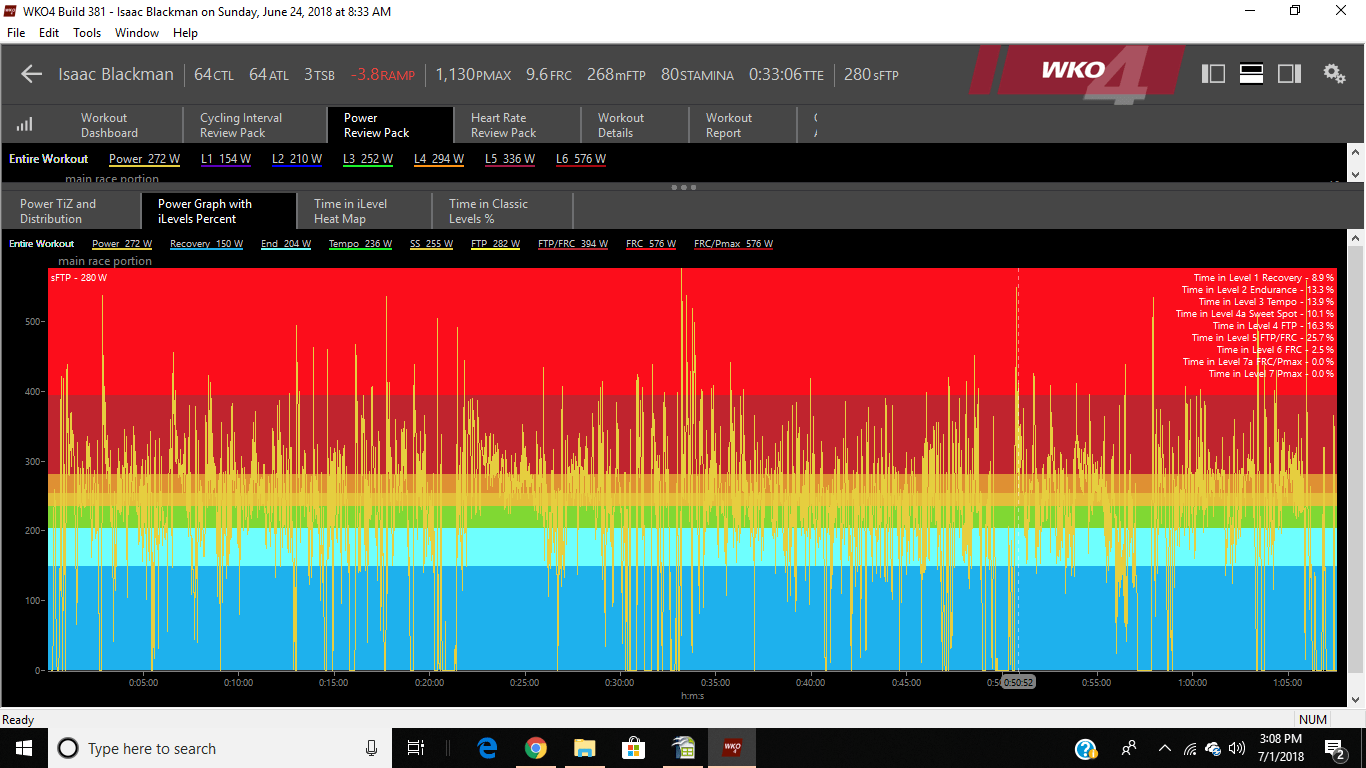 I recently bought some new software to help analyze power files and the software engineers created new power zones based on Dr. Coggan’s work called iLevels.  Dr. Coggan came up with them to directly correlate with an athlete’s unique power distribution curve.  Isaac spent the largest majority of that time in his time FTP/FRC iLevel (similar to the VO2 Max intervals in the classic levels) and FTP iLevel.   This comes down to about 36 minutes total time in the FTP and FTP/FRC zones.  Next I want to zoom in on what WKO4 calls the Hero Bar. 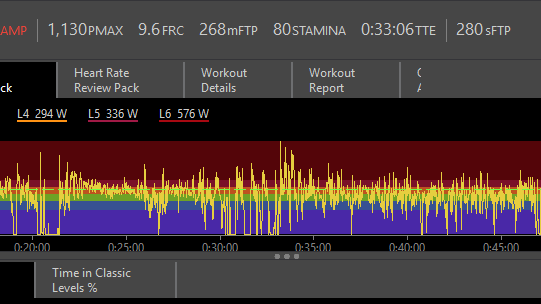 The main thing I want to point out is the mFTP.  WKO4 has analyzed Isaac’s unique power curve and estimates his threshold to be about 268 watts.  I have it set at 280 (sFTP).  However, the interesting thing to note here is his Time to Exhaustion (TTE).  TTE is the amount longest consecutive amount of time he has held 268 watts in the 90 days.  This means the amount of time Isaac can hold mFTP is about 33 minutes.  FTP, has traditionally been known as the best average power you sustain for an hour.  Well, that isn’t actually true anymore.  Depending on the athlete, it can range from 30 to 70 minutes.  As a triathlete, I want to get that to the longer end of the spectrum by extending the amount of the time Isaac can hold mFTP.  By doing that, he should be able to hold higher wattages for longer duration on the bike leg of a triathlon.  Isaac had his garmin set to auto lap for every 5 miles.  The first 30ish minutes of the race (lap #3 and lap #4) he held consistent power, but then his average started dropping off as seen here:

What I want to do in the next few weeks of training is try to get his TTE longer than 33 minutes so you can hold that higher power longer.  From what I’ve been learning in the last few days of WKO4 software, I think i can do that.  Isaac has a very good FTP, especially for his body weight, we just need to get him to be able to hold that a little longer for his OLY races. The plan is to longer FTP and sweet spot intervals and some tempo rides that have him riding tempo for 150% to 200% of the time for TTE.  From the time I had looked at this data, Isaac had 6 weeks til AG nationals and 2.5 months until AG worlds in Australia.
Isaac run was very good. This is partially due to the way he pedaled his bike (quadrant analysis).  The course involved a little bit of trail running, so the GPS was off, but he managed to run 5:45/mile for the 10K off the bike.  He was able to negative split the run as well. His watch autolaps every mile (laps 13 and 14 involved the trail portions, so the GPS read wrong and those time splits should be faster than what his Garmin captured) 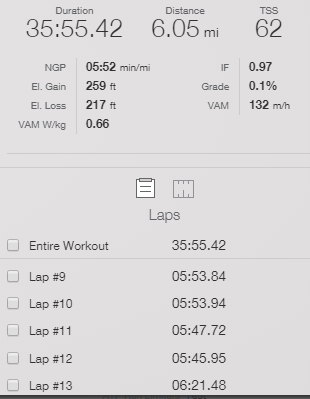 So, both Isaac and myself have some work to do.  As a coach, I will be prescribing longer FTP, SST, (sweet spot tempo) and Tempo intervals and do a few less FTP/FRC intervals (traditionally VO2 Max intervals) than we have been doing.  Time will tell if the work I plan to prescribe pays off for Isaac at USAT AG Nationals and AG World Championship later this year!