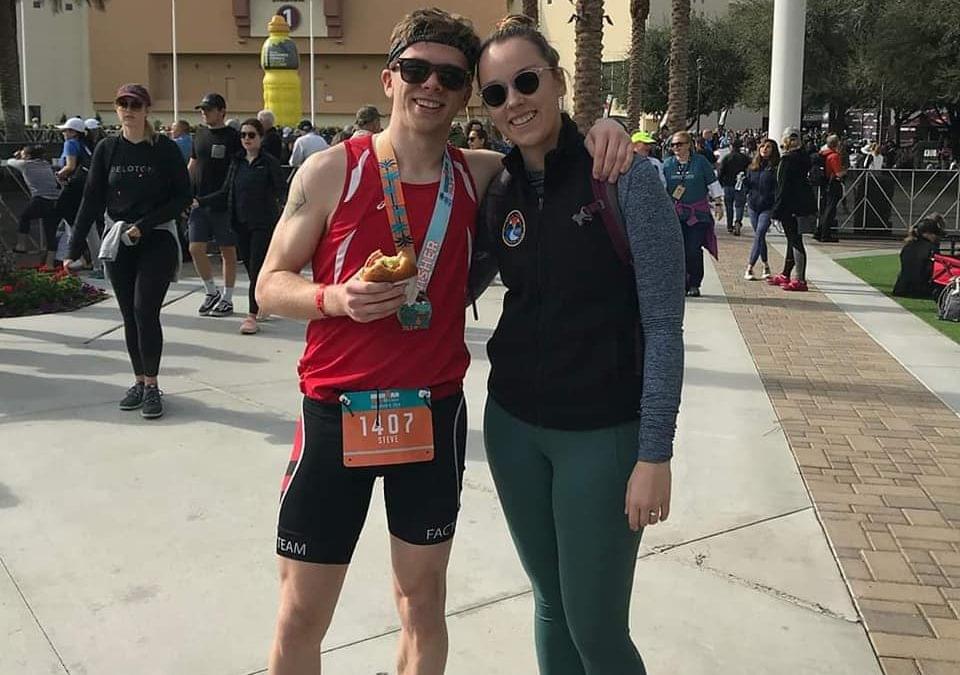 Last weekend, Steve Moors, took part in the Ironman 70.3 Indian Wells race.  It was his first race since coming back to Progressive Endurance for coaching when he was training for a Full Ironman distance race a few years ago.  He came late in the year after doing IM Canada and taking a little time off after the race to get ready for this event.  We had just under 3 months to get him ready for this event.  And with the time we had to work with, things couldn’t have gone better.  He PR’d at the 70.3 distance by about 15 minutes!  Here is a quick power analysis of his bike during the race.  A few terms to make sure you understand the lingo first:

TSS (Training Stress Score) – a way of measuring how much stress is put on your body from a ride. TSS is calculated using Normalized Power (NP), Intensity Factor (IF) and ride duration.  TSS is calculated like this:  TSS = ((Time riding in seconds x IF x NP)/(FTP x 3600)) x 100

CTL (Chronic Training Load) – Think of this as your fitness specific to your ability (i.e. FTP, threshold pace, LTHR, etc.) for each workout you do calculated from the last 90 days

ATL (Acute Training Load) – Think of this as your fatigue from the last 7 days.

TSB (Training Stress Balance) – To get this number, you use this formula:  TSB = CTL-ATL.  To make sure someone is ready for the race, getting this number is right is key.  The number range you aim for varies depending on the priority of the race.

The first thing I try to do before the race even starts is to get the TSB within the right range for the priority of the race.  This is done through proper building throughout the training cycle and tapering correctly.  Since this was an A race for Steve, my goal was to get his TSB (aka Form) between 15 and 30.

As you can see here, he was right within the range with a TSB of 26.

Alright, on to the race data.

I instructed Steve to push about 230 watts for the 56 mile bike leg.  He didn’t quite achieve that goal wattage which affected his TSS for the bike.  The target range for a 70.3 is 170-190 TSS so an athlete can still run well off the bike without leaving too much on the table during the bike leg.  Steve did say “the second half of the race course had a good number of turns which caused a lot of congestion on the course, so I was spending a good amount of time in the bull horns and not grinding in the TT poisiton.”  You can see in the screen shot below the sections he was talking about where the power data has the most peaks and valleys (about 90 minutes into the ride until the end).  Up until this point, he was averaging aboug 220-225 watts. 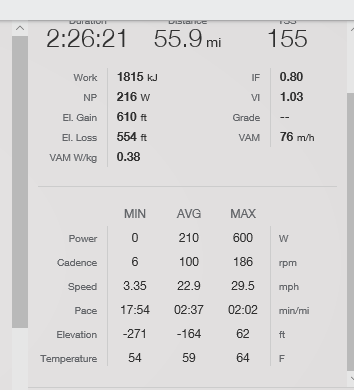 That is about the only “negative” thing I can say about Steve’s race.  Take a look at how close his NP and Avg PWR is.  only 6 watts.  That is insanely close.  In fact, the NP is only 3% higher then the Avg PWR.  That is how the VI is calculated.  1.03 is very good for a VI in a triathlon.  Anything under 1.05 is considered good.  The other thing you can see in the screen shot above is the average cadence.  100 RPM.  That is probably the highest avg RPM I’ve seen in a race.  But it is a good thing as shown in the screen shot below of his Quadrant Analysis. 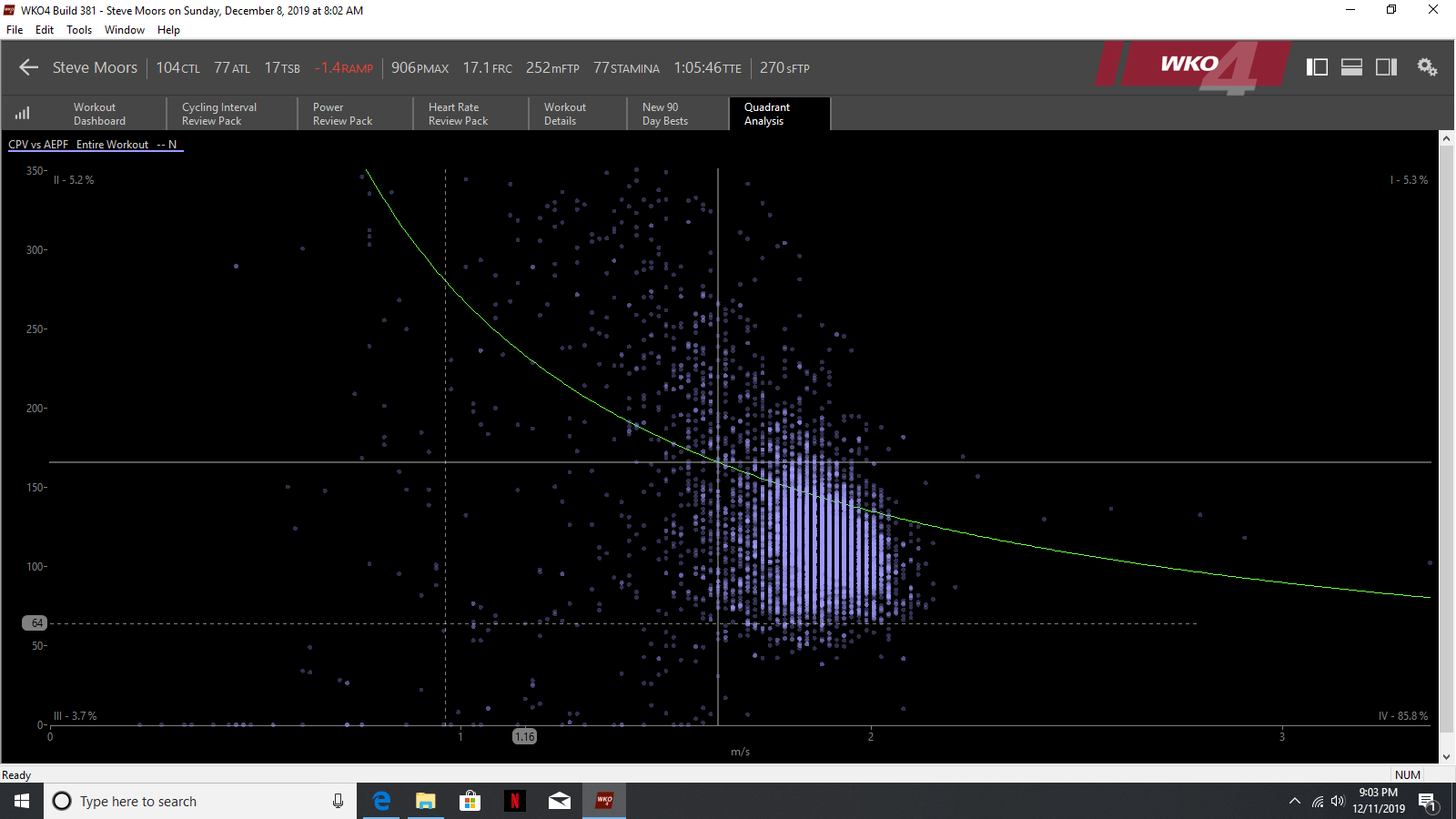 The main thing this chart shows is that not all watts are created equally.  See this blog I wrote explaining this chart.  In short, the goal for a triathlete during a race is to keep the majority of the watt creation in Q3 and Q4, which is exactly what Steve did.  Since his cadence was so high during the majority of the bike ride, most of his power was created in Q4 (low force, high cadence).  By riding mostly in Q3 and Q4, Steve saved glycogen for the run and burned more fat for energy during the bike.  A few more charts showing his cadence below.  The first shows that he only spent about 7 minutes coasting and about 81% of his pedaling time (i.e. I removed the 7 minutes of coasting) between the cadences of 90 and 110. 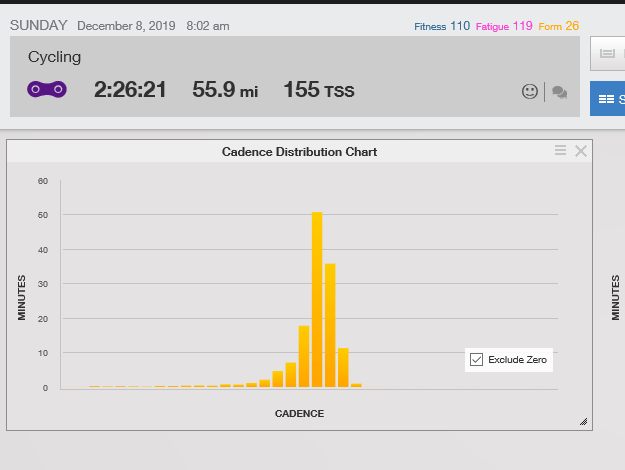 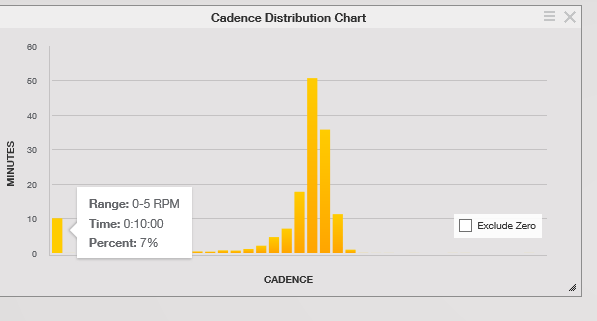 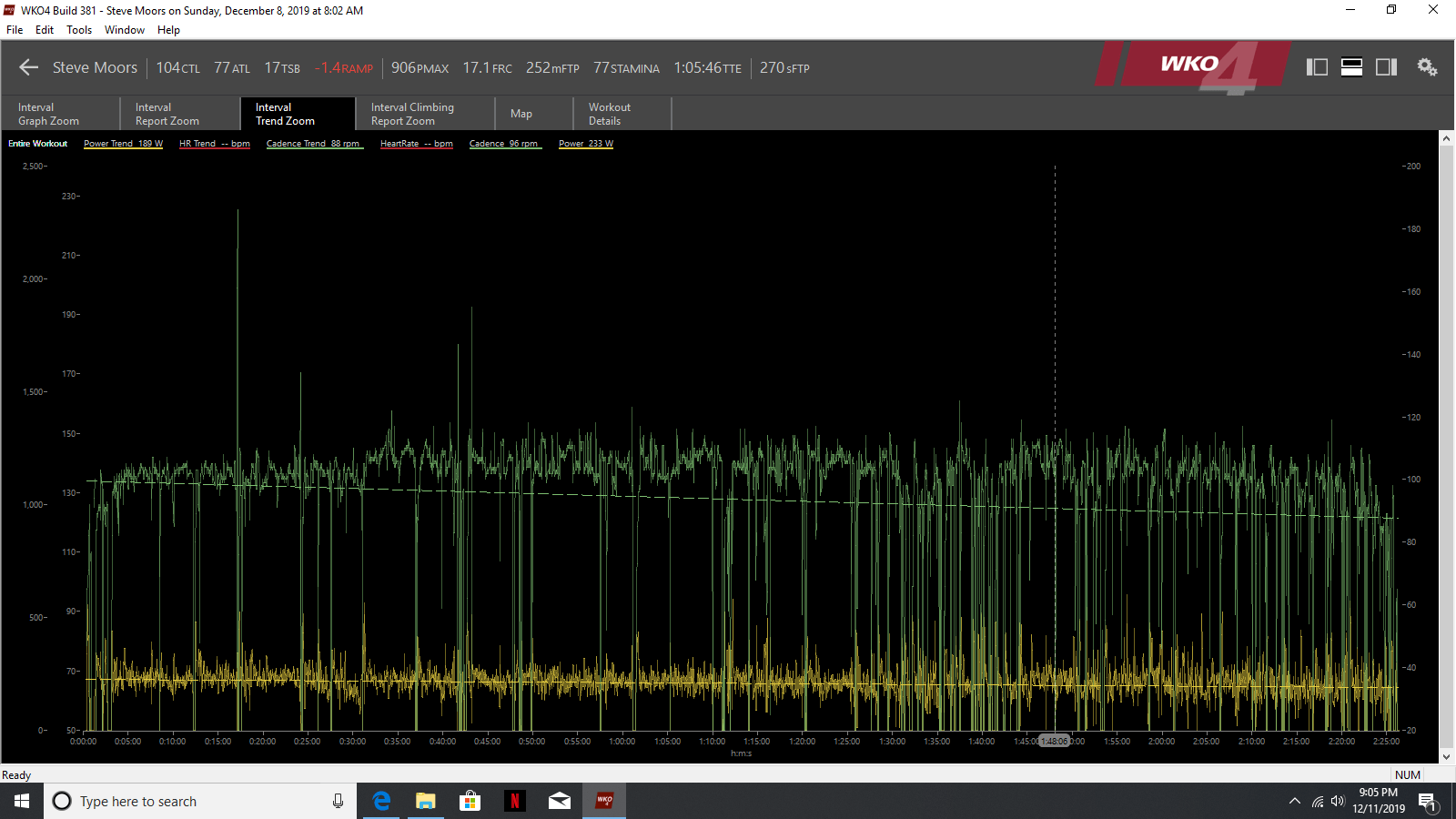 After the bike, Steve paced his run really well for the first 9 miles.  He was able to hold about 6:30-6:40/mile.  He started fading for a few miles and kicked it back up for the last mile or two.  This is likley because of the limited time we had to get ready for the race.  But he still had a stellar race with a PR of 15 minutes!