Last weekend, lots of athletes went to Chattanooga, TN to race the 2019 70.3 Chattanooga triathlon.  Progressive Endurance had 2 athletes race at this venue.  I want to take some time to review their power files from the bike and go over some of the things that they did well and things they could improve in hopes that you could learn a few things and apply them to your training and racing (both power files were used with permission of the athletes).

Before getting into the data, a few terms to define:

TSS (Training Stress Score) – a way of measuring how much stress is put on your body from a ride. TSS is calculated using Normalized Power (NP), Intensity Factor (IF) and ride duration.  TSS is calculated like this:  TSS = ((Time riding in seconds x IF x NP)/(FTP x 3600)) x 100

CTL (Chronic Training Load) – Think of this as your fitness specific to your ability (i.e. FTP, threshold pace, LTHR, etc.) for each workout you do calculated from the last 90 days

ATL (Acute Training Load) – Think of this as your fatigue from the last 7 days.

TSB (Training Stress Balance) – To get this number, you use this formula:  TSB = CTL-ATL.  To make sure someone is ready for the race, getting this number is right is key.  The number range you aim for varies depending on the priority of the race.

Drew is a second year athlete at Progressive Endurance.  He raced an easier 70.3 last year (Ohio 70.3) and was hoping to beat his time at this race.  We had to back down his run mileage a little due to a minor injury that was likely due increased demand at work as a firefighter in addition to training.  We didn’t get a chance to do a lot of run training prior to the event since it just healed up a few weeks prior.  His plan was to race the swim and bike and take it easy on the run.  Prior to the event, I told Drew to hold about 180 watts for the 56 mile bike ride (about 82% of his FTP).  I did some number crunching to come up with this number and tested it in some race simulations with Drew to be sure he would end up in within the TSS range suggested for a 70.3 bike leg.  Here are a few screenshots of the data: 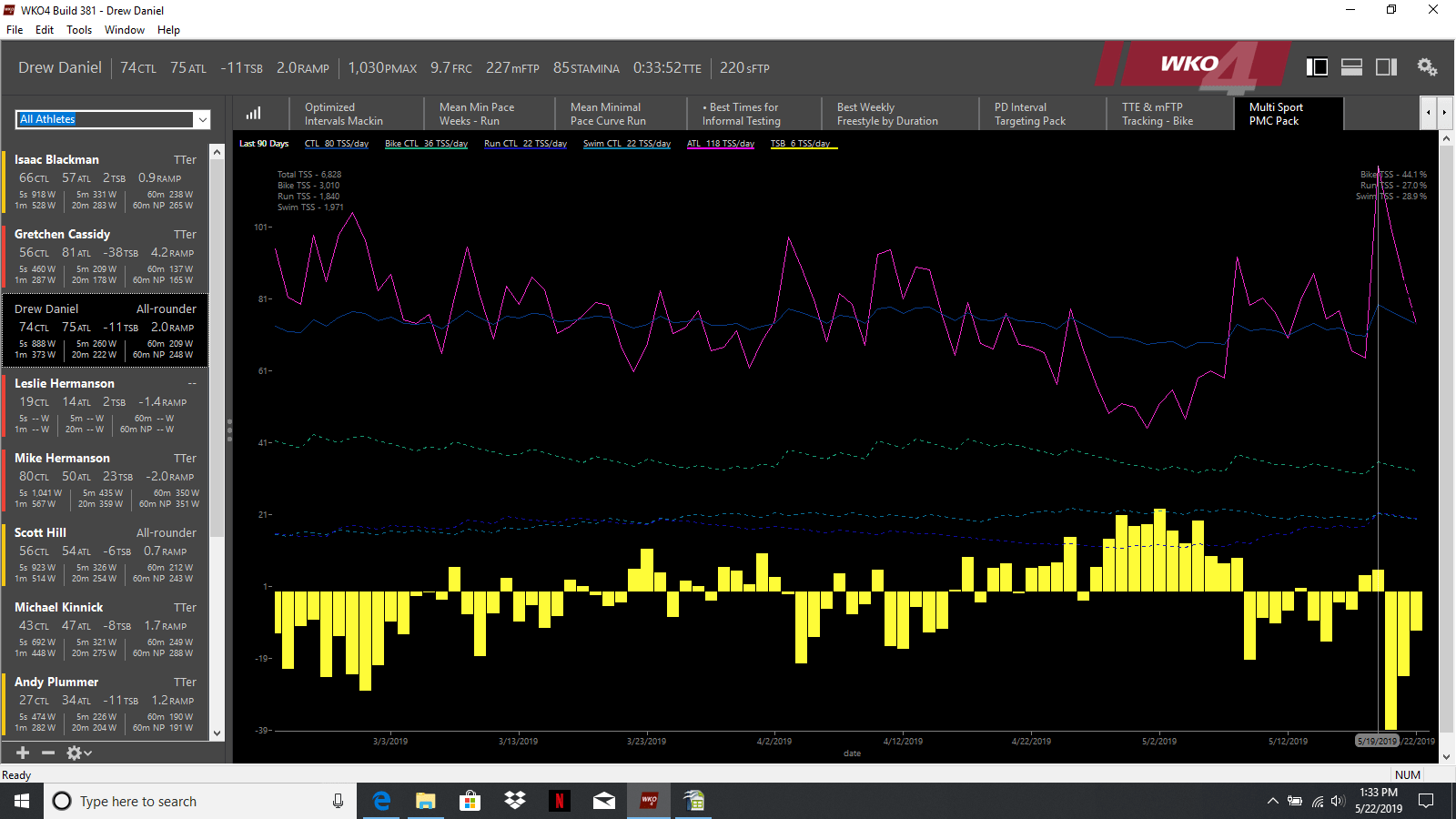 This is the Performance Management Chart in WKO4.  I typically give someone a little higher TSB for an A race, but due to Drew’s minor set back and not being able to “race” the whole event, I decided not to sacrifice too much fitness for this race to get his TSB a little higher. 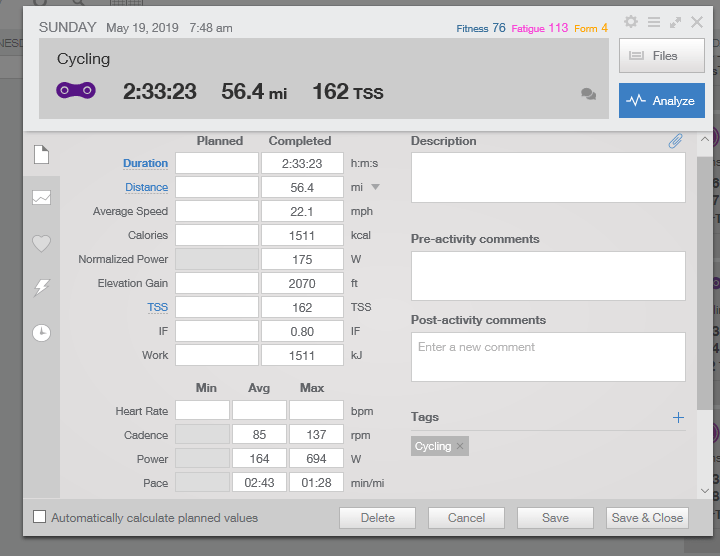 Remember I told Drew to try to hold about 180w?  You can see he averaged a little lower than that, but his NP was 175.  IF is calculated from NP, which plays into the equation for TSS.  Since he had a NP a little less than what I was hoping for, his TSS fell a little under the suggested range for a 56 mile leg of the bike ride.  That being said, I’d rather have the athlete a little under the target than a little over.  You can also calculate the VI from this: 1.067. This tells me that Drew did fairly good job at holding steady power.  For a triathlon, a VI of 1.05 is considered really good.  He was just over that number.  So he could have done a little better.

But why was his NP 11 watts higher than his AVG power?  Take a look at this graph from WKO4: 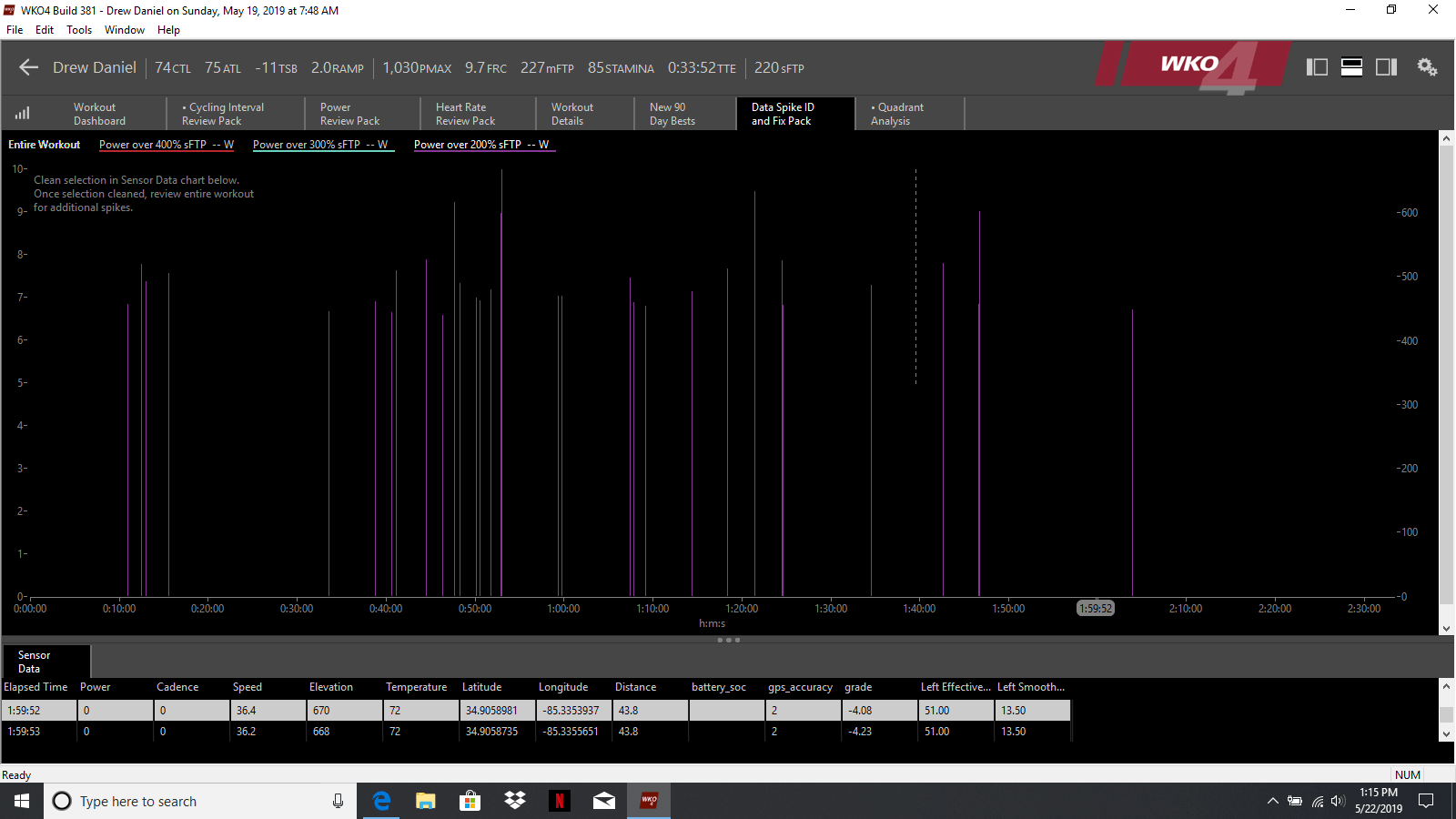 These purple lines are spikes in his power that are at least 200% over threshold.  You can see that he has about 35 times during his race that he “burned a few matches.”  These high power outputs burn glycogen and can quickly add up to higher levels of fatigue and make your body feel like it rode harder than it did. 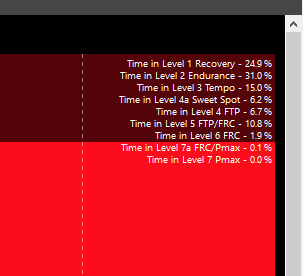 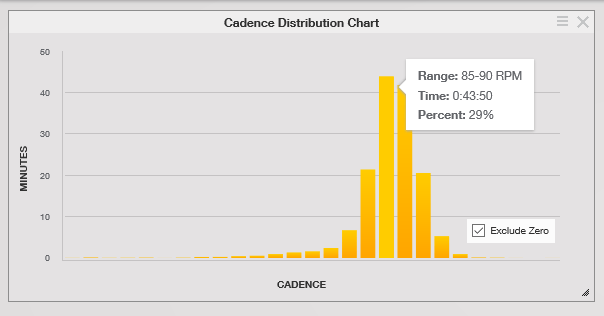 Next thing I want to focus on is his cadence.  Lots of triathletes ride with a cadence that is too low.  I removed all the 0’s from the data to get rid of the times he was coasting.  You can see in this screenshot, he spent the most amount of time at the cadence of 85-90 RPM.  He spent 50% of his time during the ride (after removing 0’s) at cadences between 70 and 89 RPM. 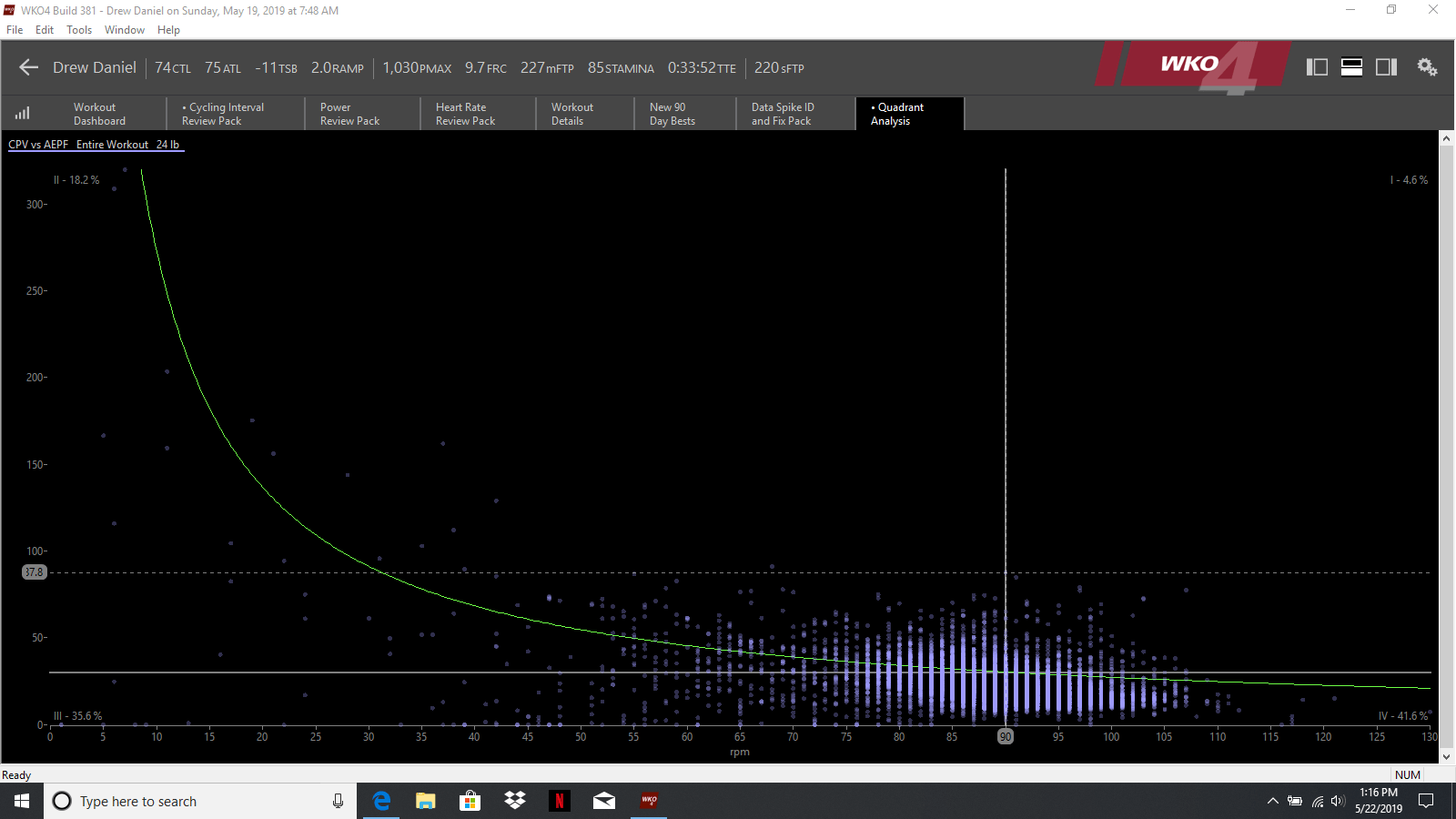 This is a quadrant analysis graph.  To understand it more in depth, click here.  The basics for a triathlete during a race is that you want to spend the majority of your time in Q3 and Q4.  you can see that Drew did a pretty good job at that.  He spent about 77.2% of his ride in these quadrants.

If I had to give Drew a grade on how well he executed his bike portion of the race, I would give him a B+ or A-.  The two areas he could improve upon slightly are getting his cadence up a little higher to 90+ RPM and riding just a bit smoother to get his VI to 1.05 or less.

Despite not doing a lot of running prior to the race, Drew still managed to pull off a 6 minute PR!  His secret… was it the hat he wore?  I don’t know, but he sure looks like he was having a good time out there! 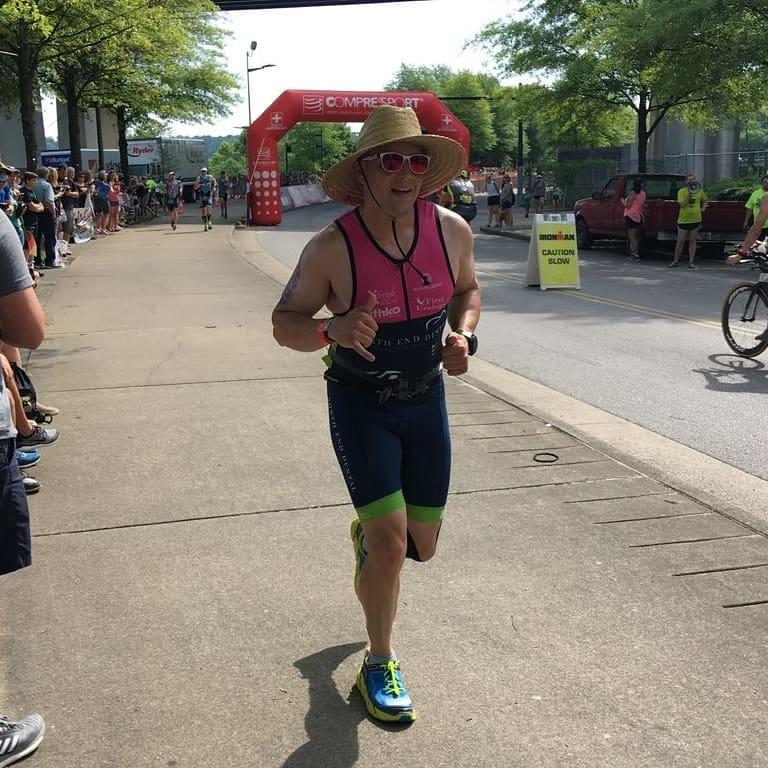 Sara also took to 70.3 Chattanooga for her first triathlon of the season.  She didn’t have any set backs leading up to the race in the form of injury.  I told her she would need to hold about 100w (about 77% of FTP) and hold a cadence of 90+.

You can see here that Sara’s TSB was 23.  This is within the range for an A level race.  So she was ready to race when taking this graph into consideration. 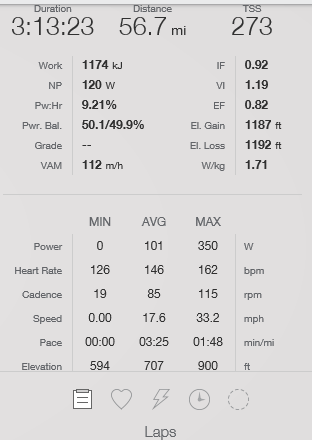 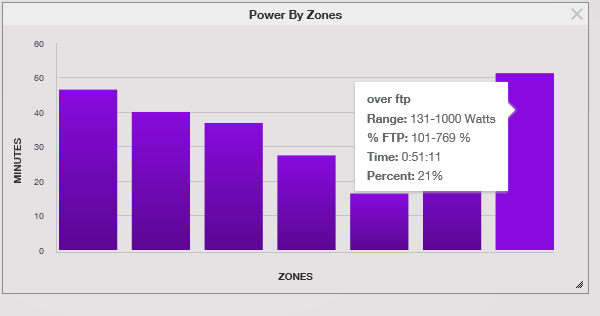 To get this chart, I added a power zone on TrainingPeaks to see how much of the time she spent above FTP to give a clearer picture of what caused her TSS to be so high and her NP 20% higher than her avg. power and IF to be 92%  You can see that she spent about 51 minutes (about 26% of her total biking time) over FTP.  You can see her all the spikes of 200% or greater in this graph:

The darker lines are just longer periods of time at 200% or greater over FTP. 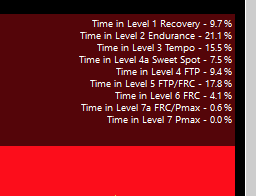 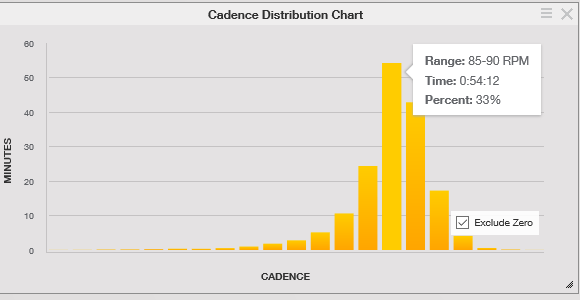 Sara has a couple Ironman distance races later this year.  As you can imagine, when doing an Ironman distance race, the consequences of not riding efficiently and wisely is only exacerbated in comparison to a 70.3 race.  We will be working on getting her ride more smoothly to keep that NP and IF lower (and as a result the TSS) and bringing the cadence up.  The good news is that we have time to make these corrections and time to practice.

Save 15% on your order at Infinit using code PROGRESSIVEENDURANCE at checkout.