rogressive Endurance recently had 4 athletes take part in the Ironman 70.3 Ohio.  They all did really well in this event, but I wanted to highlight two of them because they executed the bike portion of the race extremely well which set them up for a great run and finishing time.  The athletes I’ll be highlighting are Robert Strobel and Jessica Morgan.  But before we dive into that, I need to define a few terms so you can understand the lingo:

Okay, now that we got that out of the way, let’s start by looking at Jessica’s power file: 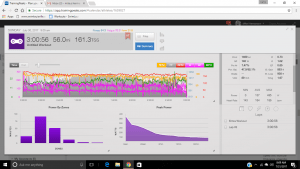 The first thing a coach must do to figure out what power to push in any given race is what the estimated speed will be for the athlete.  This is because TSS is based on power and time.   The goal TSS for the bike portion of a 70.3 so you can still run well off the bike is about 170-190 TSS. I estimated Jessica’s speed to be about 19 mph for this race.  By using that speed to give me the time (in seconds) on the bike, I was able to dial in her power range for the bike.  After running a few numbers, I determined her goal power to be between 145 and 150w (76-78.5% of FTP) to try to land her close to 170-180 TSS.  I went closer to the lower end of the goal for her because she had struggled in the past with the run leg.  I wanted to keep her legs as fresh as possible without leaving too much energy on the bike course.

Jessica got pretty close to the lower end of the power goal.  At the end of the ride she averaged 137 watts with a NP of 140 watts.  With the slightly lower power numbers, she got 161 TSS for the ride.  Just a bit shy of the suggested range, but not too much.

Jessica did a fantastic job of holding steady power as evidenced by her VI being only 1.02!!  That is insanely good for being on the bike for 3 hours.  This is due to two things:  1.  her cadence was never zero and 2.  she didn’t have many spikes in power.  See how steady the pink line in her power file?  Perfect, which is next to impossible to do unless in a controlled environment, is 1.00.  This meant she didn’t burn much glycogen in her muscles and save it for the run.   Keeping that VI as close to 1.00 as possible means a lower TSS at the end of the bike. 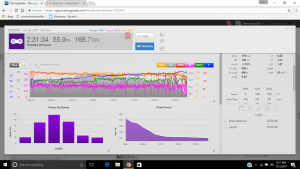 I started with the same process of determining Robert’s goal wattage for the day.  We estimated he would go about 21 mph.  As you can see by the power file, he actually was closer to 22 mph.  His goal power for the ride was 190-200w (80-84% of FTP) to land him right in the middle of the 170-190 TSS for the bike ride.  His average power was 198 and his NP was 199!  Since he was within the power goal but went faster than we thought, he ended up just under 170 TSS for the ride.  In hindsight, he could have pushed 5-10 more watts for the bike course and got within the range for a half iron distance.

Robert’s VI was 1.01!  Insane how close that was 1.00.  He did an incredible job holding steady power (as you can see by the pink line).  Same as with Jessica, he never had a cadence of zero and had very few spikes in power.

So why am I showing two power files that are basically identical?  Wouldn’t it be good to have something to contrast them with to show where one of them went wrong or did something better than the other?  In this case, they both did well.  The biggest difference I want you all to see is their percent of FTP that they were told to push during the race.  A lot of coaches just have a cookie cutter mentality of “an athlete must aim for x% of FTP for a half, y% of FTP for a full, and z% of FTP for an Olympic distance.”  This is simply not the case.  If I would have told Jessica to push the same percent of FTP as Robert, her FTP (when taking into consideration a faster speed due to higher power) would have been closer to 220-235 TSS.  That is way over the limit and definitely would have resulted in a lot of walking on the run.  If I would have told Robert to push the same percent of FTP as Jessica, his TSS for the ride (when taking into account a slower speed) would have been closer to 155 TSS.  That would have left him with fresh legs, but leaving a lot of time on the bike course that most likely would have resulted in a slower time.

So understanding TSS for racing is crucial to get the best results possible.  It is also crucial for a proper build and taper as you can see below by looking at both other their PMC’s (Performance Management Chart) 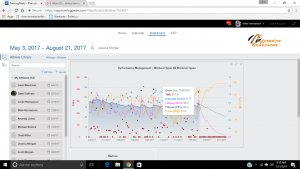 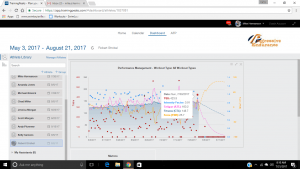 I am not going to go into detail of how this chart is read and made.  But the basic idea of using TSS for all workouts is what gives you a person’s current fitness level (CTL), fatigue level (ATL) and their readiness to race (TSB).  In order to race well for an “A” race, the athlete should aim to be anywhere from +10 to +30 TSB.  This means their fatigue level is low in comparison to their fitness level).  Both Jessica and Robert were right around mid +20’s to +30.  Everyone is different.  Some athletes may race better at +10 while others race better at +30.  There in no magic formula to this, just a bit of trial and error to figure out what works best for a particular athlete.

Thanks for reading and if you have any questions, or want help with getting ready for your next race, please don’t hesitate to contact me at mike.s.hermanson@gmail.com